The Northern Dawn: A History of the Reawakening of the Germanic Spirit: From the Twilight of the Gods to the Sun at Midnight por Stephen Edred Flowers 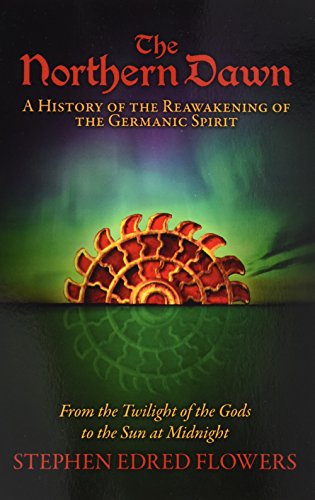 Stephen Edred Flowers con The Northern Dawn: A History of the Reawakening of the Germanic Spirit: From the Twilight of the Gods to the Sun at Midnight

Páginas: 204 Géneros: 12:HRAX:History of religion 12:0:0 Sinopsis: Throughout the United States and Europe, a revival of interest in all things Germanic is taking place. This can be seen in the growth of pre-Christian religious movements, and in the much wider popularity of movies, novels, and television shows about the Viking Age. Just as other ethnicities show a healthy desire to reconnect with their indigenous past, the revival of Germanic culture appeals to people of European descent who feel cut off from their deepest ancestral roots.But as Stephen Flowers argues in the pages of his far-reaching book, this is only the latest phase in a larger reawakening with a rich, if troubled, history. He defines what constitutes the Germanic Tradition, and explains how this tradition was fragmented and submerged with the coming of Christianity to the Goths, the Franks, the Anglo-Saxons, and the Scandinavians. More importantly, he shows how the northern spirit survived in myriad and sometimes surprising places