Every Night I Dream of Hell por Malcolm Mackay 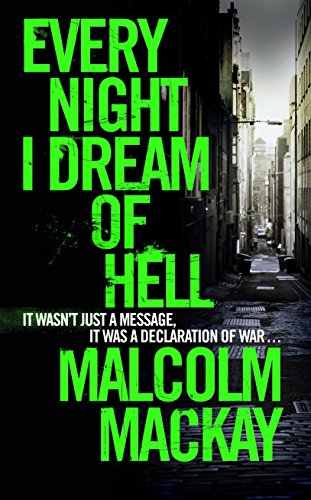 Malcolm Mackay con Every Night I Dream of Hell

Longlisted for the Theakston's Old Peculiar Crime Novel of the Year 2016.

From the award-winning author of The Glasgow Trilogy, comes Every Night I Dream of Hell, a dark and thrilling Glaswegian crime drama.

Nate Colgan: a violent man; 'smart muscle' for the Jamieson organization. Someone to be afraid of.
But now, with its most powerful individuals either dead or behind bars, things within the Jamieson organization are beginning to shift. When Nate, long working on the fringes of the business, is reluctantly appointed its new 'security consultant', he can little imagine how things are about to unravel . . .

It begins with an execution, a message; and soon the various factions within the organization are sent into chaos. But out of the confusion comes one clear fact: a new group has arrived in Glasgow, and in their quest for power they are prepared to ignite a war. But who is behind the group? And why has the calculating Zara Cope – the mother of Nate's child – suddenly appeared back in town?

Meanwhile DI Fisher, buoyed by his recent successes in finally jailing some of the city's most notorious criminals, is prowling on the edges of these latest battles, looking for his chance to strike before all hell breaks loose . . .

In Every Night I Dream of Hell Malcolm Mackay takes us deep into a world of violence, fear and double-crossing that grips until the final page has been turned.