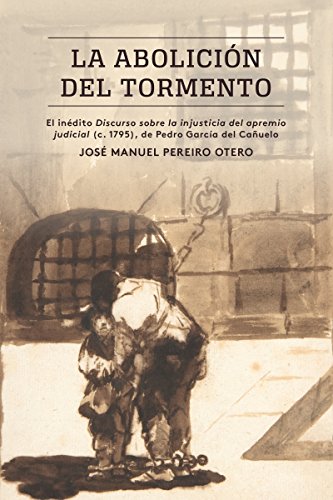 The abolition of judicial torture—alongside the eradication of both slavery and capital punishment—was one of the most consequential issues debated in eighteenth-century continental Europe. A revealing component of this controversial debate was presented in the unpublished "Discurso sobre la injusticia del apremio judicial," written by the attorney Pedro Garcia del Canuelo. Seeking support for its publication, he forwarded the manuscript to Prime Minister Manuel Godoy in 1795. The savvy Spanish politician, however, not only rejected the text but also warned its author against further discussing the issues raised in his treatise. As a result, although its title was known, the essay was lost to history.

The current volume, La abolicion del tormento, analyzes, transcribes, and reproduces the complete "Discurso" while framing its proposals within the European debate regarding the abolition of torture and the prohibition of other methods of mental and physical coercion allowed by diverse tribunals. The monograph additionally considers the extent of the controversy associated with torture in Spain as it provides biographical information on Garcia del Canuelo and examines the philosophical and juridical foundations related to this atrocious practice, one which produced one of the fiercest exchanges of the Enlightenment. The aforementioned dispute reflects the political tensions of an era because a discussion on the legality of torture involves a consideration of what constitutes a human being, what is the relationship between legality and justice, and what are the limits of lawful power in relation to the natural rights and the intrinsic value of the individual. Thoroughly documented, this study should be of particular interest to those concerned with intellectual processes and practices during the modern era, not only in Spain, but throughout the Western world as a whole.